Why did Haroon dislike society?

How did Haroon interpret the verse: "You who believe! Take not the Jews and the Christians for friends. They are friends one to another and who takes them as friends is indeed one of them. Verily, Allah guides not the unjust people. If you were to follow their desires after this knowledge has come to you, you would be against Allah and have no protector nor helper.”

How did Karim explain the verse to Haroon?

Who are the Jews the verse is talking about?

What does "the constitution of Medina" means?

Why do we have to understand the context in which the texts appeared?

Islam and violence are often associated to each other. Several incidents ‘in name of the Islam’ created an incorrect perception of what is prescribed in Islam. Examples hereof are the attack on the World Trade Center on September 11 2011, but also the growth of extremist organizations such as ISIS in 2014, the terror attacks in several European cities. As a result, Islam has often been discussed in the media in a negative way.

Although these attacks were initiatives of Islamic groups, their actions are in contrast to the principles of Islam. These extremist groups justify their actions by calling it ‘jihad’ thereby misusing the term to justify violence.

Although radicalism and extremism have often been associated with Islam over the last two decades, violence is not at all inherent in Islam. Islam forbids the use of violence against anyone, without difference between believers and non-believers. It is true that the Qur’an contains certain verses about violence, but one must read these verses in their intended context. It is not the intention that we interpret and apply Koran verses literally in our current society. This would be inconsistent with the intent of the text.

Radicalism and extremism have taken different forms over the years. In the last century, for example, we were faced with a number of right-wing extremist organizations and groups. Communist extremism also had a negative impact on Western society. In recent years, we have also been contending with advancing Islamic radicalism. What becomes clear here is that violence is not necessarily inherent in a particular belief, philosophy or ideology, but that many different factors lead to extreme thinking. This stems from different beliefs, philosophies and ideologies and Islam has no patent on that. This is also confirmed by the Israeli writer and intellectual Amos Oz: “Fanaticism is not only the heritage of Al Qaeda or IS, Jabhat Al- Nusra, Hamas and Hezbollah, of neo-Nazis, anti-Semites, white supremacist thinkers, Islamophobes, the Ku Klux Klan, the hilltop hooligans and other blood shedders in the name of their beliefs. All those fanatics and what looks like them - we all know them. They look at us day after day from the television screen, passionately waving in front of camera lenses preaching all kinds of slogans into the microphone…. ”.1

Before we zoom in on the content, we will define some concepts about violence from the Quran, hadith and Islamic theology:

1. Jihad: Linguistically, jihad means ‘to make an effort’. The term is usually used in the context of acts of war; endeavor in war. But in the overarching sense of Jihad as assumed in this manual, war is only a small part. Various Islamic scholars attribute thirteen meanings to the term Jihad. The main meaning is therefore to make an effort, but not necessarily in the context of war. For example, you can make efforts for justice, for a well-functioning society, ...

2. Al-Qital: Linguistically means fighting. This term is also usually used in a war context, but, like jihad, has a broader meaning.

3. Al-Harb: Literally it means war, like for example two countries attacking each other. Al-Harb differs fundamentally from jihad. War mainly revolves around the domination and victory of the other. Jihad refers to the efforts made to guarantee general security.

4. Al-Unf: Literally means violence. Although Al-Unf is often associated with Islam, the term is not mentioned anywhere in the Quran.

5. Al-Irhab: Al-Irhab stands for terrorism. ‘Terrorizing’ is stated in the Quran, in Surat Al-Anfal verse 60. It says: “And use whatever means of power you have, including war horses, to terrify the enemy of Allah, your enemy and the others. ”2 (Al-Anfal: 60) It is important to correctly interpret the term ‘terrorization’. Terrorizing here does not mean carrying out the acts of violence as in the recent terrorist attacks, but rather means impressing the opposing party to gain respect.

There are Islamic groups who are convinced that they can reach social change only through violence. For them, the purpose justifies using all necessary means, such as terror attacks on the innocent. However, such acts are absolutely prohibited and in no way prescribed in the Quran. Yet the supporters of those groups pretend that various Islamic regulations justify this violent behavior. They use the following strategy3 : 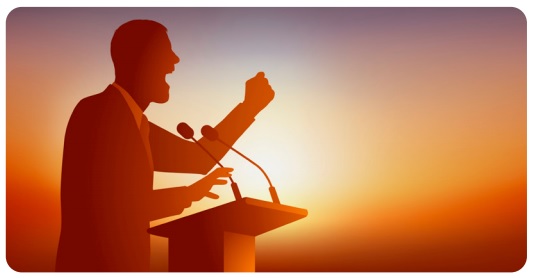 In Islamic theology this subject is called “Takfir”. It is a very sensitive issue where a Muslim gets labelled as non-Muslim. It is not the job of any Muslim or just any persOn to judge someone else’s religious experience. There are situations in which people openly admit that they no longer (want to) be a Muslim. In that case, it is clear that a person himself no longer wishes to be considered a Muslim, but it must be emphasized that there are no consequences. Again, it is not a Muslim’s job to judge or sanction another’s religious experience. Moreover, the Quran provides for the freedom of religious choice, it says: “There is no compulsion in our religion.” (Al- Baqara: 256)

Secondly, they incite the broad population to depose the head of state. Again , they justify violence to achieve the goal of deposition. The process of deposition causes chaos and a camp of supporters and non-supporters within society arise. The head of state is labeled as “apostate” who may be murdered because of the non-application of Islamic law. This is a very vehement view in contrast with the Quranic referred above emphasizing that there is no compulsion in religion. Therefore, there is no deposition or killing allowed. Also in a Quran verse is stated: “The Truth is from your Lord. Anyone who wants to believe, let him believe. Anyone who doesn’t want to believe, let him not believe.” (Al-Kahf: 29). We must respect everyone’s freedom to believe or not believe what he/she wants.

Use of violence is therefore by no means a justified manner of bringing change in society. Violence must always be condemned. However, there are specific situations where violence is allowed like war for protection. When a Muslim country is threatened and all alternatives to stop violence have been exhausted, one may resist with violence, if the strict rules of war within Islam are still respected. The rules are:

1) No violence until all alternatives to stop violence are exhausted.

2) No violence unless a country is wronged.

3) No violence unless people are driven from their homes.

4) Do not kill women, children, the elderly or sick people (only use of force against soldiers in a war).

As we see, the rule that allows violence refer purely to protection. These rules are included in the following verse and the sunnah of the Prophet:

“Go both (Moses and his brother) to Pharaoh, for he has transgressed. Speak both to him softly. Maybe he will take it to his heart.” (Ta-Ha: 43.44). The scholars conclude from this verse that one must first choose the diplomatic path to stop violence. For Pharaoh is known as a great tyrant and yet Allah commands Moses and his brother Haroon to speak softly to him.

The other rules are to be found in the following verse:

“To those who are fought [the fight] is permitted because they have been wronged; God has the power to help those who have been unjustly expelled from their homes just because they say, “Our Lord is God” - and if God had not let men restrain one another, then there were hermits, churches, synagogues and mosques in which God’s name often mentioned is certainly destroyed. But God will certainly help those who help Him; God is powerful and mighty.”5 (Al-Hajj / 39: 40)

This is also emphasized by Abu Bakr As-Siddiq, a close companion and successor of the Prophet Muhammad - pbuh -. He said to one of his military commanders: “I advise you the following ten things (regarding the rules of warfare). Do not kill women or children, the elderly or the sick. Do not cut down or burn trees, especially if they are fruit-bearing trees. Do not destroy uninhabited places. Do not kill animals except for food. Do not burn or disperse bees. Do not steal any of the items seized during battle. And do not act cowardly.” (Al-Muwatta, Volume 21, Hadith 10)

In another hadith, Abu Bakr added not to attack priests and monks and not to destroy their places of worship. Buildings must also remain intact. Even consuming the animals’ milk is strictly prohibited, except with the permission of the owners.

Thus, waging war is subject to strict regulations based on the Quran and the Sunnah of Prophet Mohamed.

Exercise 1
Underline the correct meaning of the term

Exercise 2
Read the statements below and put a mark in the right column.

1. How can you apply the linguistic meaning of jihad in your daily life?

2. Can any person apply Al-Qital and Al Harb. Explain why or why not.

Spiritual jihad is the highest rank of jihad and means that the Muslim must do his utmost to be a good person. He does this by fulfilling his religious obligations such as the obligations towards Allah, towards himself and towards others.

In Islam there is always an important triangular relationship between:
1. An individual
2. The fellow man or the other
3. Allah 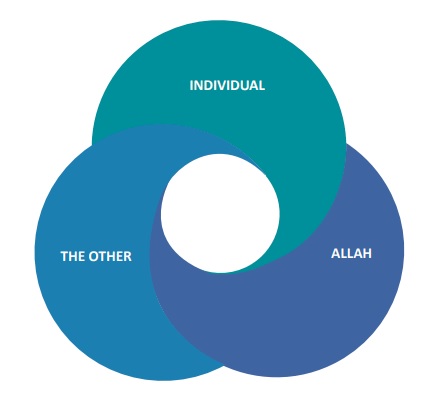 It is up to every Muslim to maintain balance between these different relationships. This is part of spiritual jihad, which is to fulfill its religious obligations in order to achieve and maintain harmony within the triangular relationship. Compliance with this obligation is not so easy. That is why jihad means making a great effort. According to Islamic rules, a person should cleanse the soul because the soul is the core of man. By cleansing his core, a person will be able to maintain a harmonious relationship with himself, with others and with Allah. In the Quran it is quoted as follows: “Surely he who cleanses it (the soul) (from sins) will succeed. And surely the one who spoils it, will lose.”7 (Ash-Shams: 9 and 10).

Clearing the soul of desires and always maintaining harmony within the triangular relationship requires a lot of effort. It is therefore part of the spiritual jihad.

EXERCISE 1: Triangle Relationship
between the individual (me), the fellow man (the other) and Allah. In the relationship with which of these three actors does one try to achieve harmony in the examples below?
Fill in the column and choose between: Me – The other - Allah

Jareer Ibn Abdullah, may Allah be pleased with him, narrated: “The Prophet Sallalahu ‘alaihi wasalam said: Whoever has no mercy towards men will not have a merciful… “

“The best way to remember Allah is to recite the Shahada. This is Laa illaaha illa Allah and means there is no god but Allah.”8

For those who follow a path of knowledge, Allah will facilitate the path to Paradise.”

Takfir:
Declaring someone as a non-Muslim.

Spiritual Jihad
A Muslim must do his utmost to be a good person.

Jihad of ideas
A figurative battle of different ideologies.

Social jihad:
Making efforts to take care of yourself and others in society.

Economic jihad
The financial maintenance and support of one’s family, relatives, loved ones and everyone for whom one has financial responsibility.