Is it fair that Levi calls Lindsay Amalek?

What does Moses mean with "journey"?

Who was "undettered by fear of God"?

What does Moses mean with "strugglers in your rear?"

Who or what is Amalek according to you?

ASSIGNMENT. Read the next two passages. Then answer the questions on the following page.

[8] Then Amalek came and fought with Israel in Rephidim.
[9] So Moses said to Joshua, “Choose men for us and go out, fight against Amalek. Tomorrow I will stand on the top of the hill with the rod of God in my hand.”
[10] So Joshua did as Moses had said to him and fought against Amalek. And Moses, Aaron, and Hur went up to the top of the hill.
[11] Now when Moses held up his hand, Israel prevailed, but when he let down his hand, Amalek prevailed.
[12] But Moses’ hands became heavy. So they took a stone, and put it under him, and he sat on it. And Aaron and Hur supported his hands, one on one side, and the other on the other side. And his hands were steady until the going down of the sun.
[13] So Joshua laid low Amalek and his people with the edge of the sword.
[14] Then the Lord said to Moses, “Write this as a memorial in a book and rehearse it to Joshua, for I will utterly wipe out the remembrance of Amalek from under heaven.”
[15] Then Moses built an altar and called the name of it, The Lord Is My Banner;
[16] for he said, “For the Lord has sworn that the Lord will have war with Amalek from generation to generation.”

[17] Remember what Amalek did to you by the road when you were coming out of Egypt,
[18] how he met you by the way and attacked at your rear all that were stragglers behind you, when you were exhausted and weary. He did not fear God.
[19] Therefore it shall be, when the Lord your God has given you rest from all your surrounding enemies, in the land which the Lord your God is giving you for an inheritance to possess, that you must blot out the remembrance of Amalek from under heaven. You must not forget it.

What event are these two passages referring to?

Is this event told in exactly the same way, or is there a difference in information between the two passages?

If there is a difference in information: what is the difference between the Exodus passage and the Deuteronomy passage? (You can also answer this question the other way around).

What is the essence of these passages:

Who will fight/eradicate the memory of Amalek:

According to you: who or what is Amalek?

2.3 Interpretation of the Amalek Passages

The story of the journey out of Egypt is well known. The people of Israel have been slaves of the mighty Egypt for years, where ‘the law of the strongest’ prevails. Then G-d comes, and He helps the Jewish people escape. However, in the desert, the people of Israel get hungry and thirsty, and they start to question the decision to leave Egypt. They even question their liberator, G-d: “Is the Lord among us, or not?” (Ex. 17:7) After this sentence, Amalek’s attack occurs.

The place name Rephidim has a special meaning. The name consists of the verb ‘rafah’ and the noun ‘jadim’. ‘Rafah’ means ‘to become weak’. Jadim’ means ‘hands’. Rephidim thus means: ‘the becoming weak of the hands’. This means that our courage can fail: our strength can, literally and figuratively, ‘leave our hands’.

In the end, G-d declares war on Amalek. G-d takes on responsibility! Moreover, it is not a one-off battle, but it will take place from generation to generation. 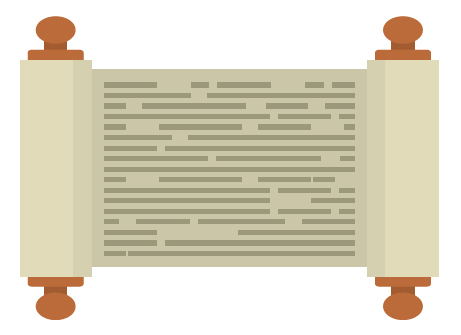 The Deuteronomy Passage on Amalek gives us new information on the battle:
1. Amalek attacked while the Jewish people were “by the road”. The Torah means the path of liberation, leading from Egypt to the Promised Land. The people of Israel didn’t have a home yet, lived in uncertain times, and were very vulnerable.
2. Amalek attacked “in your rear”. The ‘rear’ means the people at the back of the line, who consisted of the most vulnerable and weak. Amalek’s attack was twice as cruel: among an already vulnerable people, he attacked the most vulnerable.
3. It says: “He did not fear God”. Translations here often refer to Amalek. The sentence thus means: Amalek did not fear God. But it’s not that simple! The Hebrew language leaves open the possibility that it could be Israel that did not fear God. The sentence is somewhat isolated, and grammatically it is possible.
4. We read that Israel also bears responsibility. It is a commandment or mitzvah: an obligation given by G-d. Israel has the obligation to wipe out the memory of Amalek. And at the same time, the attack must be remembered. “You must not forget it!” 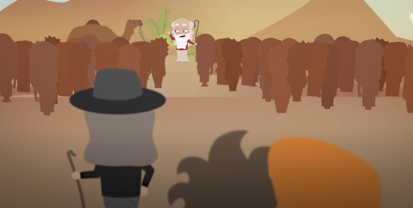 1. Ex. 17:8-16 teaches us:
• G-d will wipe out the remembrance of Amalek
• G-d will wage war against Amalek from generation to generation

2. Deut. 25:17-19 teaches us:
• Emphasis that the Jewish people were ‘by the road’: the road to
liberation from confinement in Egypt to freedom in the land of Canaan.
• Amalek attacked Israel at their weakest point
• Israel must blot out the remembrance of Amalek
• It is a mitzvah: a religious commandment

ASSIGNMENT. Answer the following questions with help from the explanation above.

Where do the passages in their book take place:

Who’s to wipe out the remembrance of Amalek?

Who did not fear G-d?

Explain, using your own words, the meaning of the place name ‘Rephidim’.

In the Deuteronomy passage, it says: “He did not fear God.” This sentence can grammatically also refer to Israel. Why would Israel not fear G-d? What could this mean?

Amalek’s attack was an act of war. Is the commandment to erase the memory of Amalek a matter of self-defense (to survive), or a matter of revenge?

[…] do you think it refers to specific generations?

Do you think the commandment to blot out the remembrance of Amalek still applies today?

In this glossary you will find more information and an explanation of certain concepts.

Amalek
In Hebrew, the term ‘Amalek’ can refer to both a person, Amalek, and a people, the Amalekites. This module uses both meanings interchangeably.

Genocide
The term ‘genocide’ means the deliberate extermination of an ethnic group. International law regards this act as a horrific crime.

Canaan
According to the Hebrew Bible, Canaan is the land promised to the Jewish people. This area lies between the Mediterranean Sea in the West and the Jordan River in the East. This area is now made up of Lebanon, Israel, a part of Syria, and Jordan.